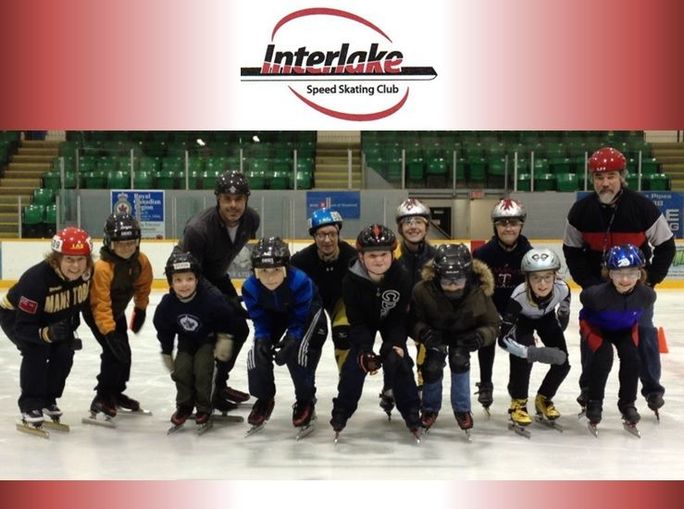 Interlake Speed Skating has received permission to return to play. The club will follow COVID recommendations.

Participants are asked to bring a helmet, gloves/mitts and soccer-style shinguards.  Speed skates will be provided.  Practice is at Selkirk Recreation Complex.  Come through the Player Entrance at the back and go to Dressing Room 8.

About the Interlak﻿﻿e Speed Skating Club...

The Interlake Speed Skating Club practices Tuesdays 5:15-6:45 pm and Sundays 8:15-9:15 am between the months of October and March. Practices are held at the Selkirk Recreation Complex in Selkirk, Manitoba.

During practices, skaters are coached on how to improve their technique and skill in this fast-paced Olympic sport. Our club members range from beginners to provincial team members and all abilities in between. All ages from kids to adults are welcome to come out!

Short Track Speed Skating is one of the most innovative and exciting sports since it was introduced at the 1988 Olympics. The skating takes place on a 111 metre oval track where corners are tight and speeds are fast. Skaters race in both sprints and long distances, in groups of four or five as well as pursuits where two skaters race each other but start on opposite sides of the track.

Long Track Speed Skating takes place on a 400 metre track. It has been an Olympic sport since 1924. These are longer races and test your endurance, typically ranging in distance from 400 metres to 5000 metres.

Speed skating is a super sport where you train as a team yet compete individually; it’s you against the clock. So, if you are looking for the ultimate sport to test your abilities, sign up today!
Interlake SSC News:

Camp was run by Jonathan Guilmette, 3 time Olympic medalist, former Head Coach of the Japan National Team, Current Director of the Short Track Program, Calgary Oval.  Also running camp was Joffrey Larocque, Junior National Short Track team member and level IV coach with the Calgary Oval Program. We were so fortunate to have the benefit of their abundant expertise.

A huge thank you to members of ISSC who helped with food donations and mats!
August 26- 29, 2019
Selkirk Recreation Complex, Selkirk MB
​